by admin
in Politics
0

FOTSOM is a socio-political group for the grassroots mobilization of the APC Presidential campaign.

Inaugurating the group on Monday in Abuja, Mrs. Tinubu-Ojo charged the executives to comb all nooks and crannies of the country and mobilize grassroots support for her father.

She noted that, Asiwaju Tinubu remains the only Messiah that can salvage the country from its current security challenges and economy woes.

“A lot of people believed in him, Asiwaju, they believed him at this crucial period, where we are in Nigeria today, we need expertise, we need experience, we need who has done it that we have seen. We Dont have to gamble with this present electioneering period, that is why we deem it feat that we have to market this man not because of us as individual but because of the nearest future. If you are here in Nigeria today and you think Asiwaju is not the right candidate, posterity will judge you” 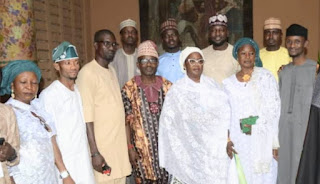 Earlier, The National Chairman of Folashade Tinubu Solidarity Movement, Prince Kayode Akin-Samuel stated why Tinubu is the right presidential candidate for the 2023 election.

“Looking back at the track record of Tinubu when he was the governor of Lagos State, he is a detribalized leader, he was the only governor that have indigines across the states in his carbinet as commissioners, agencies Director Generals and so on.

“The blueprints he did for Lagos still remain the  guide for rapid development, internally generated revenue increased from 700 millions to several billions, remember that Lagos is a mini Nigeria. We should allow him to do these to Nigeria too”.

When asked about his view on Muslim-Muslim ticket, he said “if we want Nigeria to regain it’s lost glory, we should seperate religion from governance, religion s a personal belief while governance is a collective issue.

If we are able to do this, we can move forward. Anyone talking about is just using it as political propagandas for campaign. We should come together o support Asiwaju for a new Nigeria”.

He also said that “Obi cannot be a threat to Tinubu, both of them were governors both in Anambra and Lagos but to answer you, go and check their track records and how much they have contributed to national development, you can easily judge and know who to follow”

Lagos Residents Lament Use Of ‘Korope’ By Kidnappers, Armed Robbers

Lagos Residents Lament Use Of ‘Korope’ By Kidnappers, Armed Robbers