by admin
in Sports
0

ABEOKUTA – Ogun State Goverrnor, Prince Dapo Abiodun, has said that the State would be branded to make it a reference point in sports development in the country.
The Goverrnor who disclosed in Abeokuta the presentation of prizes winners of the Abeokuta  10 Kilometres Marathon Race, said goverment would work towards  making Ogun  the sports capital of Nigeria.
He said sports was beyond religion and one of the factors that bind the nation to together, calling on the youths to take to sports as a profession and gain from its health benefits.
“Sports is beyond religion. It is one of the main factor that binds us as citizens of this nation. We are working towards making our dear State a reference point in sports in Nigeria. We are going to brand Ogun as a model in sports”, he said
The Goverrnor who presented the prize for the overall best male runner from Ethiopia, said a bigger race would be staged in Sagamu, congratulating the winners for their feats.
Meanwhile, Goverrnor Abiodun has described sports as a veritable tool that could unite the various  ethnic groups in the country, if well harnessed. 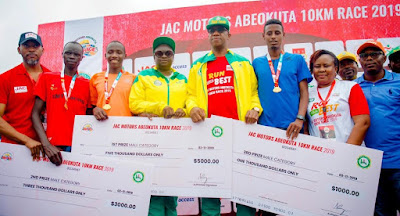 The Goverrnor who noted this in his office when he received organising membersof the Abeokuta 10 Kilometres Marathon Race, led by the former Commissioner for Youths and Sports, Mr. Bukola Olopade, said sports have the potentials of bringing every segment of the country into a United country.
“Sports is what Nigerians take seriously. It is a major unifying factor that should be encourage. Sports,  apart from being a profession, also help in keeping people fit and healthy.
“When NIgeria is taking part in any sporting activities, be it athletic or football, Nigerians momentarily forget their differences and come together to support their team untill after the game when we go back to our different ways”, he stated.
Prince Abiodun who described the State as, “home of Sports”, said it has produced eminent sports men and women, who had made the State and country proud, saying that a Sports Commission, would be created to take sports to greater height.
He stressed the need for youth to be encouraged to take part in sporting activities, as a means of livelihood, saying it would help them to be more discipline and shun social vices.
“When youths are encourage to take part in sporting activities, it will help them to be more discipline and take them off social vices. It will also help improve their academic performance”, he said.
While thanking the organisers for choosing the State for the event,  the State helmsman, opined that it would afford the State an opportunity to showcase its sporting and business potentials to the outside world as well as its hospitality and cultural heritage.
Meanwhile, Kenyan Biwot Kembot has won the grand prize of $5000USD for finishing the Abeokuta 10KM marathon race at finishing time of 00:28:26sec.
Nigerian Emmanuel Gwon from Plateau state won N2million cash prize being the first local athlete to cross the finishing line and coming 4th position overall.

Ogun Sports Commissioner’s Attack On Osoba: We Stand By Our Story – Encounter News

Catch Up With All January Transfer Done Deals Day-By-Day

Ronaldo, Is No Threat To Me In Saudi Pro League – Ighalo

PFAN To Set Up Branches In Ogun LGAs

We Didn’t Get N1 Billion For NPFL — Elegbeleye

Ogun Sports Commissioner's Attack On Osoba: We Stand By Our Story - Encounter News