ABEOKUTA – The outgoing Vice-Chancellor, Federal University of Agriculture (FUNAAB), Abeokuta, Ogun State, Prof. Felix Kolawole Salako has disclosed that his administration has completed nothing less than 156 capital projects, while 22 others are ongoing.

The VC said all the projects especially the lecture rooms and laboratories were fully equipped with furniture equipment for immediate use of the students and staff.

According to him, many of the projects were abandoned by previous administrations of the institution, but in line with his 12-point agenda upon assumption of office in 2017, he accessed the intervention funds to facilitate most of the projects.

Notable among the projects are; construction of a seven-billion-litre capacity Dam in Mawuko, under Odeda Local Government Area of the state. 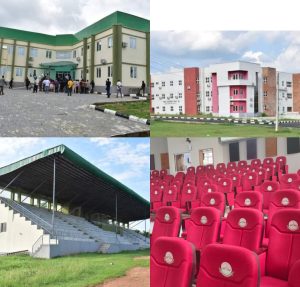 Addressing journalists shortly after the facility tour, Professor Salako said the Dam which is situated about 20 kilometres away from the campus, would serve the campus including hostels, offices, and other facilities.

The VC who stated that the construction of the Dam started in 2018, added that two reservoirs and water treatment plants are ready to receive the water channeled from the Dam before they are released for drinking and other uses.

He, however, explained that the institution is expecting fund for piping of the water, and as soon “as it is approved the pipes would be procured for seamless water supply to the campus.”

Prof. Salako said the institution is open to partnership on the Dam project but such partnership must be with equity.

Talking about the water treatment plant building and the reservoirs, Prof. Salako gave kudos to the pioneer VC of FUNAAB, Prof. Olorunnimbe Adedipe who he said constructed them but he said his own administration had to change most of the equipment because they had become obsolete.

He said, “I must commend the pioneer VC of this institution for his foresight in constructing the water treatment plant, and the reservoirs.

“But this water treatment plant and reservoirs had been abandoned for over 15 years and my administration had to renovate this place.

“And since many of the equipment had become obsolete, we had to buy new ones and remove those old ones.

“The Dam project is almost completed, as you can see the water treatment plant and the reservoirs. What remains is for us to do the piping as soon as we get the fund, which we have applied for. This Dam would solve the water problem within the campus.”

He said though, the institution has sunk boreholes within the campus, he noted  that “they are getting too many and the cost of maintaining them is getting higher.”

The Dam he added would also serve in irrigation farming during dry season.