by Admin
in Culture
0

ABEOKUTA – Residents of Ilawo community in Orile-Ilawo under Alagbagba area of Odeda Local Government in Ogun state have kicked against alleged imposition of one Alex McGregor as the next monarch of the community.

Community leaders and residents of all the 63 communities that formed Orile Ilawo kicked against the declaration of McGregor, describing him as an impostor who can’t lay claim to the Ilawo throne.

The residents in their hundreds, on Friday stormed the palace of the Alake and Paramount ruler of Egbaland, Osile of Oke-Ona, the Ogun state Governor’s office to protest against the choice of McGregor as the Oba-elect of Ilawo.

The protesters were armed with placards with various inscriptions which include: “Our Orile needs a son of the soil; Imposition is not allowed, we will not be silenced; Traditional values and Morals laid by our forefathers have been jettisoned; save us from this menace called McGregor; I Love Ilawo, where is McGregor from? Where is your village?; how can you choose a king without Oluwo, Balogun, Jaguna, Lukotun of the clan?; McGregor is from a history of killers; Osi, Sakotun, Asiwaju Bada of Ilawo are thieves, they are bribe takers and they don’t have villages in our Orile, we challenge you to come and show us your village,” among others.

Speaking on behalf of the 63 Baales present, the Baale of Asiwaju Village, Alagbagba , Chief Rafiu Sodiya insisted that McGregor is an alien who has no single village or bloodline related to any of the known 194 villages that make up Orile Ilawo.

He said, “How can local government officials jettison the original list of the warrant chiefs sent by the Ilawo Traditional Council and substitute that maliciously with a list sent by McGregor and his cronies to run election of Oba. We know who and who they paid for it. It was even learnt that McGregor has been carrying his list of bribed officials around to show people who he has bribed so far. This is very unfortunate as this only ridicules the revered and elevated position of Oba in our homeland.” 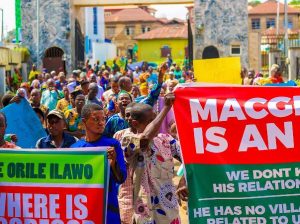 Meanwhile, the Oluwo, Balogun, Jaguna, Lukotun, and all senior members of the Ilawo council of chiefs confirmed not being part of the ‘charade’ done by the local government in electing new monarch for the community.

The Oluwo, Chief Oluwole Dosumu who spoke on behalf of the chiefs stressed that the Ilawo traditional council rejected the list used to allegedly impose McGregor on them.

The Oluwo who doubles as the head of Ilawo council of chiefs noted that McGregor cannot lay claim to the throne because he has not established his originality as being from Orile Ilawo.

He, however, warned that imposing McGregor over all the people of Orile Ilawo may lead to serious mayhem in all villages in protest.

He added, “McGregor’s cronies have threatened to burn my house, kidnap and kill me but I will die for the truth no matter how much they threaten me and my family.”

Also, the 80-year-old Baale of Lerin Ilawo, Chief Emmanuel Alabi, said all the Baales from Orile Ilawo want the stool to be occupied by one of their sons who hails from any of the Orile Ilawo villages with known verifiable history, oral and written in Ilawo.

He added that Orile Ilawo sits at the boundary of Ogun and Oyo States, Alagbagba axis to Omi Adio.

He stressed, “It is therefore imperative in view of the strategic position Orile Ilawo occupies in Ogun state to ensure we install a monarch who is originally from there, knows the people there and has lived with them, has his village there, meets with the subjects there, farmers and security agencies there to better serve the people as king.”

Similarly, the secretary to the Council of Baales of Orile Ilawo, Dr David Ariku said, the Obaship and Traditional Institutions should not just care about rituals and traditional worship, but should look inward and see how the land can be developed socio-culturally, morally, and in every way possible.

He said it is a known fact that McGregor is not from Orile Ilawo and everyone knows he only wants to impose himself using money to bribe local government offices in other for them to do his bidding.

He added, “now, the future of any developed Nation and country depends on his preservation of its history, culture, heritage, arts and culture. The richness of the Yorùbá culture and heritage connects the world just as the Atlantic Ocean connects diverse countries. Its level of wealth is multi-layered, hence, it must be protected at all cost and the role of the Obaship and traditional institutions in delivering this duty is important.

“The evils that befall us in Yorubaland today came as a result of our ignorance and failure to celebrate our ancestor, genuineness of blood as It became our lots because we have abandoned our culture, tradition and heritage.

“Chief Alex McGregor has lived 90% of his adult life in Canada and identifies himself more as a Canadian than a Nigerian, let alone from Orile Ilawo. Moving permanently back is certainly going to be a difficult and daunting task as we all know.

“He was named one of one hundred and fifty extraordinary Canadians in 2015 in commemoration of Canada’s 150 years anniversary. He has built a life for himself in Ontario and not in Ilawo township nor Orile. He does not know anywhere there because obviously he is not from there and does not have any history related to any of the villages in Orile Ilawo.

“Now, If a sitting king, who has imposed himself over subjects there is not accepted the by majority neither is he available enough to understand the intricacies of how the Clan he wants to rule over works, nor their security, let alone get involved on the activities of dwellers in many of these villages, it will be difficult for him to achieve any meaningful results in bettering the lives of the people there.”

He therefore advised and urged the governor, Prince Dapo Abiodun to look into this closely and urgently to ensure an alien is not forced on the people who own the stool.

Your Claim To Orile-Ilawo Stool Is Fallacious, Ogunsanya Replies MacGregor

Who Are The Egbas?